On November 5, 2017, Life Science Innovation Network Japan Inc. (LINK-J), and Japanese Organization for Medical Device Development, Inc. (JOMDD) held the "Medical Devices × Globalization Symposium" at Nihonbashi Mitsui Hall (Nihonbashi, Tokyo). The symposium had two parts. In the morning program, five up-and-coming teams participated in a Venture Pitch Contest. After the break, the afternoon program began with a keynote lecture, followed by lectures and discussions given by relevant persons from domestic companies and from Silicon Valley, U.S., who have been successful with global expansion, with topics such as trends of the overseas medical device market, the key to success in overseas expansion, and the current situation surrounding startups. 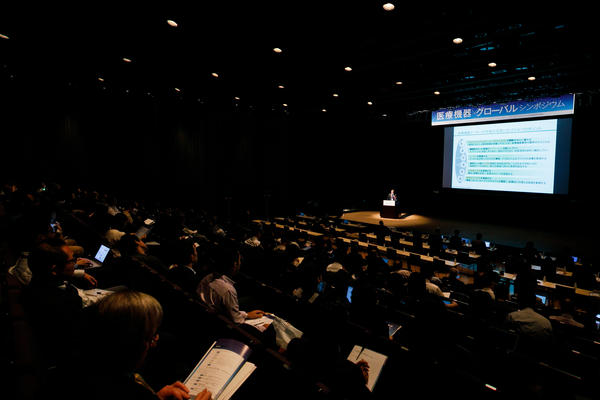 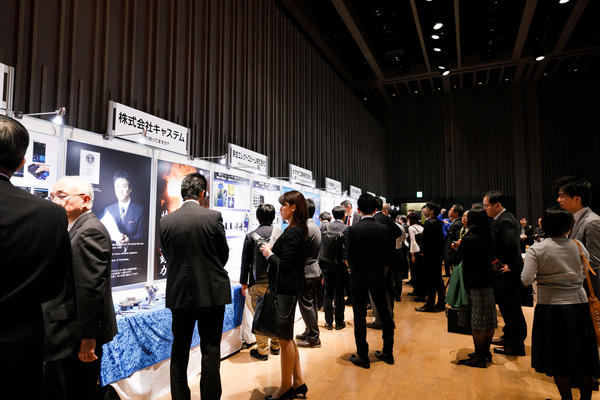 In the morning program, five up-and-coming startup teams participated in the Pitch Contest to compete for a prize (commercialization costs of up to 100 million yen or dispatching program costs). Six Japanese and U.S. specialists familiar with the medical device industry and startups served as judges. Speakers gave excellent presentations in a limited amount of time for their pitch (12 min) and a brief Q&A (7 min).

Each of the five teams that participated in the Pitch Contest tackled the commercialization of a unique idea as follows: small and lightweight health monitoring device (AffordSENS Corporation), shirt-type device capable of examining sleep apnea easily at home ("Smart Wear" SAS screening), electric toothbrush that visualizes plaque to check parts yet to be brushed with a smartphone (Ha-ppy, "Ha" means teeth in Japanese), an ultra-small thermometer that is swallowed to measure internal body temperature (NOMsense), and a preliminary exam with artificial intelligence to support physician's work (Ubie, Inc.). Because of the high-level products and presentations, even hardened judges gave high evaluations. However, in the overall review after the pitch, criticism emerged over future tasks such as, "Proper explanation of the competitive map is essential," "Reasons, patents, and so on why other companies cannot imitate the product should be made clear," and "Use should be initially narrowed down to one application rather than emphasizing versatility."

After careful consideration, "Ha-ppy" won the championship. Team "Ha-ppy" proposed "an electric toothbrush equipped with a self-examination function." Mr. Akinori Koyama, a tooth-cleaning enthusiast, is dissatisfied with his daily tooth brushing routine. He explained that the purpose of this startup is "to increase the number of remaining teeth in Japan's elderly population to the same level as Sweden (25 teeth on average), a developed country in preventive dentistry." The domestic electric toothbrush market remains in an oligopoly of foreign companies. Mr. Koyama talked about his future with enthusiasm, "We would like to create technologies that can surprise the world through innovations originating from Japan." 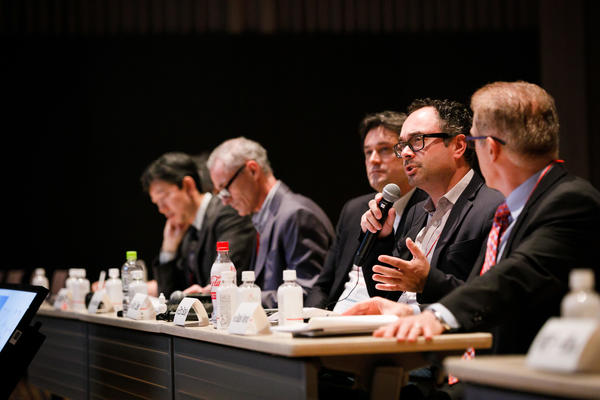 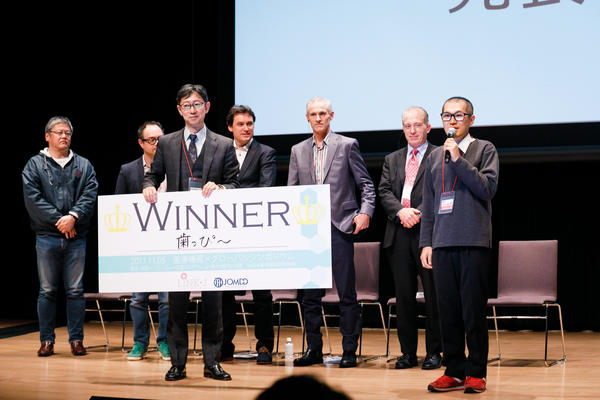 In the afternoon, after the break, keynote lectures and panel discussions were conducted by medical personnel working on medical device developments and persons concerned with medical device manufacturers and startups. First, Mr. Hideyuki Okano, LINK-J Chairman of the Board, greeted the audience as the organizer. After providing an overview of LINK-J, which was established to promote life science innovation, Mr. Okano said, "Life science is involved in an extensive range of fields from medicine, science and engineering to social science and ethics." He emphasized the importance of collaboration with external experts to solve problems.

Subsequently, Mr. Ichiro Kamoshita gave a speech as the guest of honor, highlighting the current situation where Japan is largely being left behind in terms of therapeutic device development despite its sophisticated diagnostic technologies. He proposed that Japan should contribute to Japanese citizens and people worldwide suffering from diseases using excellent medical devices originating from Japan, bringing together the power of the persons concerned. Finally, Mr. Yutaka Hishiyama spoke. After introducing the agency's activity policy, Mr. Hishiyama expressed his vision, "We will continue to provide prompt support for the delivery of the latest research results to Japanese people." 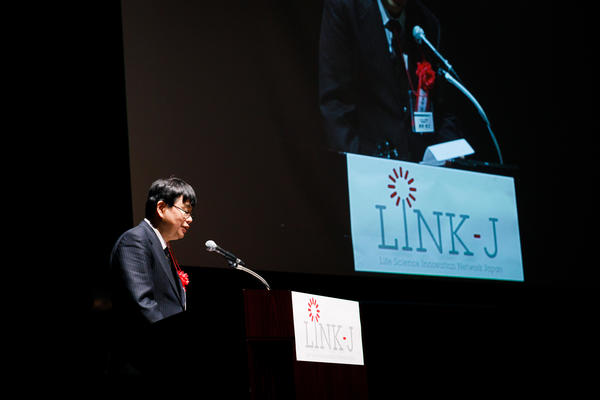 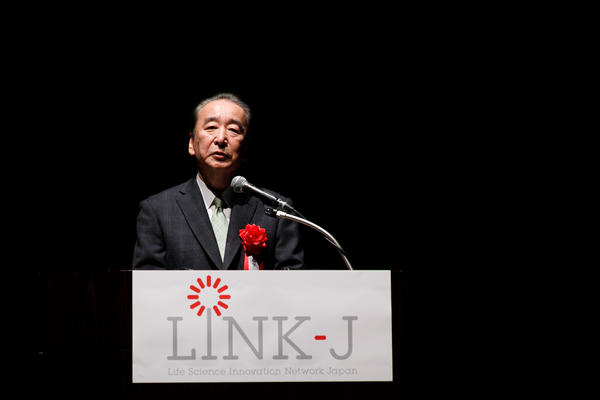 (Left) Mr. Hideyuki Okano, Chairman of the Board of LINK-J (Dean, Keio University Graduate School of Medicine Professor, Department of Physiology); (Right) Mr. Ichiro Kamoshita (Chairman of the Society of Diet Members for Quickly and Securely Delivering Good Medical Devices to the People)

The first keynote lecturer, Mr. Shogo Nishida, provided an overview of the growth strategy of global medical device companies and challenges for Japanese companies in expanding abroad. He pointed out that the medical device industry will continue to enjoy high profitability and growth potential in the future. Mr. Nishida noted that, keeping the above in mind, it is essential to always consider new business models and continue carrying it out honestly to address new values/new indicators, as represented by VBHC (Value-Based Healthcare: based on patients' preferences), without adhering to the current methodology.

The next keynote lecture was given by Mr. Yoshiki Sawa, director of Department of Cardiovascular Surgery of Osaka University, which has actively worked on the clinical application of new medical devices, including the first introduction of transcatheter aortic valve implantation (TAVI) in Japan. Currently, the Department of Cardiovascular Surgery of Osaka University is working on therapy for heart failure using iPS cell-derived cardiomyocytes, the construction of a heart simulator with deep learning and clinical application of the stentless mitral valve (SMV). Based on his experience with medical device development, Mr. Sawa pointed out that Japan has a shortage of human resources to become entrepreneurs.

Looking abroad, Biodesign, which is an entrepreneurship business school for medical device development, has been operating for 10 years with many great achievements. Therefore, by collaborating with persons in the U.S. and domestic universities, Mr. Sawa and his colleagues established "Biodesign Japan" in 2015. In his lecture, Mr. Sawa indicated the three main barriers in the R&D/startup world: "Devil's River," the "Valley of Death," and the "Darwinian Sea." Since the solution to the "Valley of Death" has progressed with the translational research, the next requirement will be a strategy to overcome the "Darwinian Sea," that is "the strategy to survive." He noted that now is the time to change medical device development in Japan to keep from being left behind. 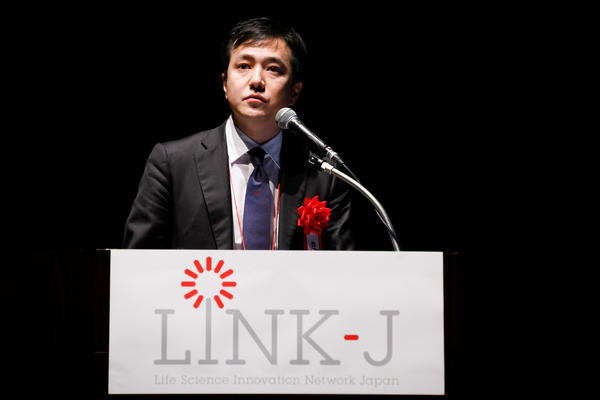 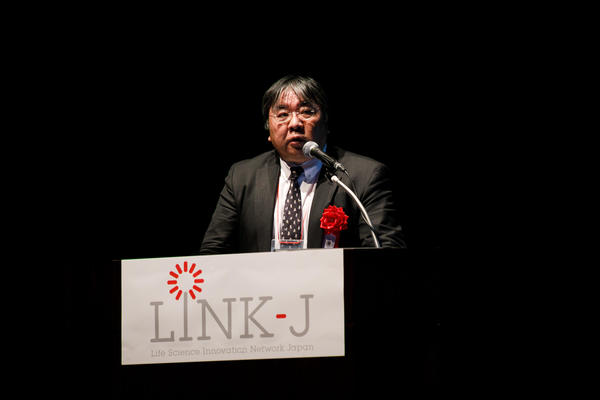 In the first half of Session 1, Mr. Makoto Nishiuchi presented a lecture. He explained the history of Asahi Intec Co., Ltd., which grew from a metal wire manufacturer into the globally-acclaimed company that develops medical guide wires through the collaborative development of the guide wires used to operate endoscopes. Regarding the secret to success in overseas development, Mr. Nishiuchi mentioned the following sequence of events: When Japanese medical specialists tackled the challenge of percutaneous transluminal coronary angioplasty (PTCA) to treat chronic obstructive lesions, existing companies did not respond to the request. Asahi Intec, a newcomer, offered to take on the challenge, resulting in the simultaneous diffusion of the treatment technique and the company's products. Based on that sequence of events, he said, "The needs at the clinical site are the starting point for medical device development." 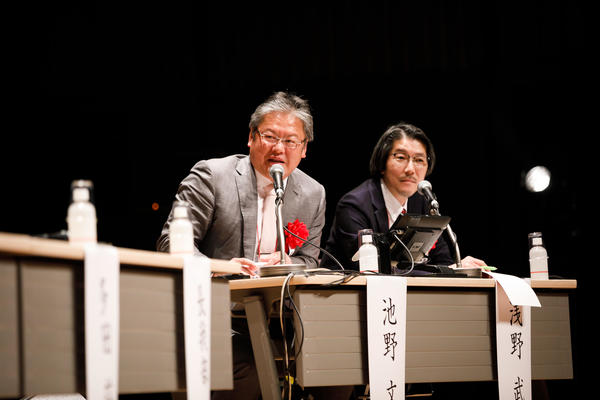 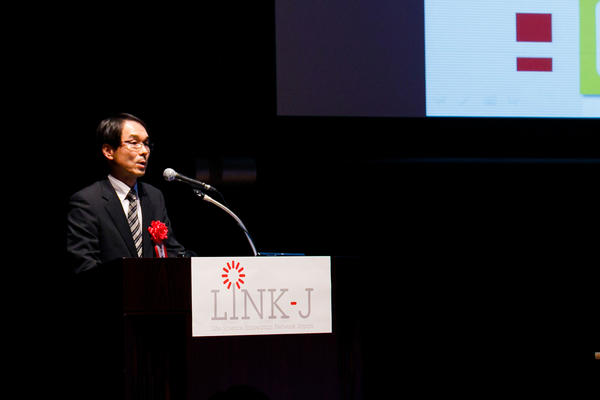 In the second half of Session 1, small lectures and panel discussions were conducted by panelists. Mr. Nobuyuki Osakabe (Corporate Officer CSO&CTO of Healthcare Business Unit, Hitachi, Ltd.), introduced the business development of the particle therapy system in the U.S. He pointed out the importance of "an inexhaustible pioneer spirit" to solve the needs at the clinical site. Mr. Soichiro Tada (President & CEO, GE Healthcare Japan Corporation), explained "Reverse Innovation," which is exemplified by the company's compact echo system that was originally developed based on the needs of emerging countries, which then opened up a new business field in developed countries. He noted that it is important to "start small and learn from failure" rather than considering many things in a variety of ways.

Ms. Tomiko Tawaragi (Chief Management Officer, Pharmaceuticals and Medical Devices Agency) introduced PMDA's activities for the accelerated approval review system, such as "Conditional Accelerated Approval System" and "Collaborative consultation for practical use of innovation (scheduled to start in December)" calling for the active use of the Agency's services for promoting global development. Mr. Taro Tsurukai (Director, New Ventures Japan, Johnson & Johnson Innovation) introduced New Ventures Japan, which was established only five years ago to create and foster startups at the globally acclaimed company group J&J. He explained the business and policy of the company, and stated its prospects for promoting collaboration within the Japanese industry and academia.

At the end of the discussion, during the Q&A with the audience, a frank opinion on overseas expansion came from a graduate student who is studying artificial hearts from a mechanical point of view, generating excitement in the venue. 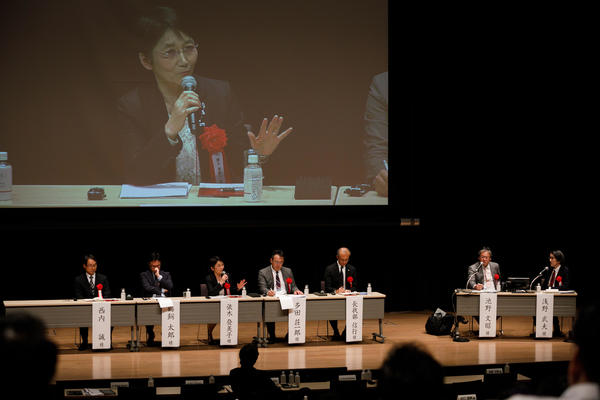 In the first half of Session 2, Mr. Babak Nemati gave a lecture. He explained the latest market trends and the development status of medical devices in the U.S., including the fields of cardiology (prosthetic valves in transcatheter valve replacement), diabetes (insulin pumps & continuous glucose monitors), and digital health (wearables/telemedicine/big data). In the digital health field, Mr. Nemati pointed out that while this field has the potential to reduce medical costs through disease control/consumer behavior, thousands of players have already entered the market without a clear differentiation between them. He presented his view that it is not easy to achieve success due to issues such as unverified clinical outcomes and the high hurdles for regulatory approval/insurance reimbursement. 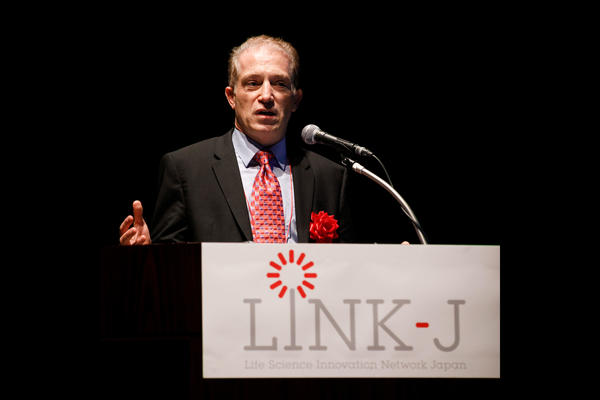 In the second half of Session 2, small lectures and panel discussions were conducted by panelists. Regarding the situation in Japan where personnel familiar with the medical device development is limited, Mr. Babak commented, "In fact, the U.S. is not rich in human resources except in California (where Silicon Valley is located)," indicating the importance of human resource development through mentorship. In addition, Mr. Ryan McGuinness said that he personally believes the that level of Japanese human resources is high, and expressed his opinion that it is important to overcome the fear of failure.

Difficulties in raising funds at the startup stage were indicated by moderator, Mr. Uchida. He said, "Companies will promise to invest 10 billion yen after development succeeds, but they will not invest the one billion yen currently required for development." Looking back on his own experience, Mr. Tatsunori Taniguchi (CEO, Remohab Inc.; specially appointed researcher, Department of Biodesign for Healthcare Innovation, and Department of Cardiovascular Medicine, Osaka University Graduate School of Medicine) commented that if a company takes slightly more risks, the success rate of domestic startups will also rise. Mr. Kohta Satake (Co-founder & CEO, CureApp, Inc.) expressed his view that if startup searches for cooperation aiming for M&A (merger and acquisition), foreign-affiliated companies are the best answer and it would be ideal to propose to overseas headquarters from the beginning. 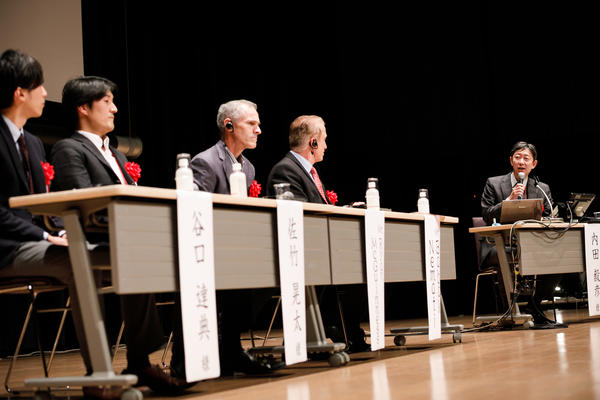 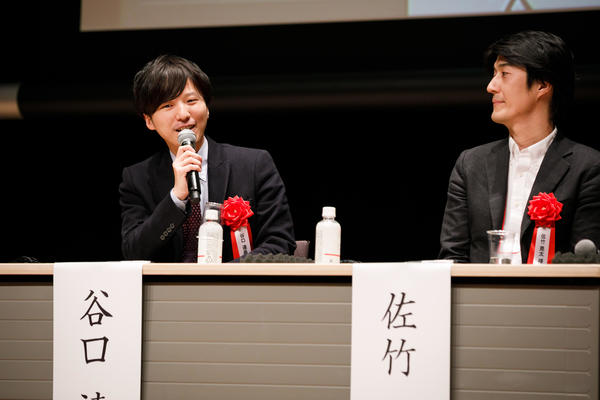 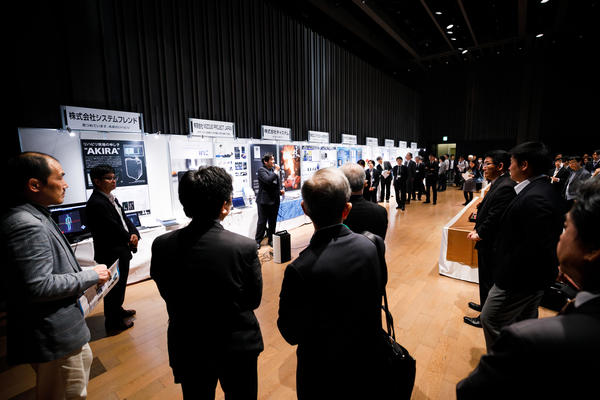 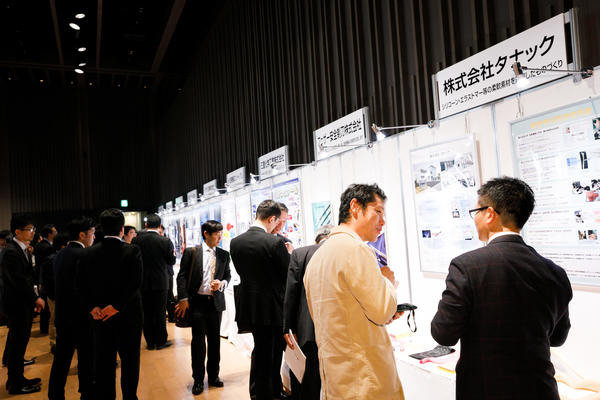 After the conclusion of all of the programs, a reception was held with the participation of the Pitch Contest judges and its contestants, speakers from the afternoon lectures and panel discussions, as well as many relevant persons from sponsoring and supporting companies and organizations. People from the floor also joined, resulting in a lively event. 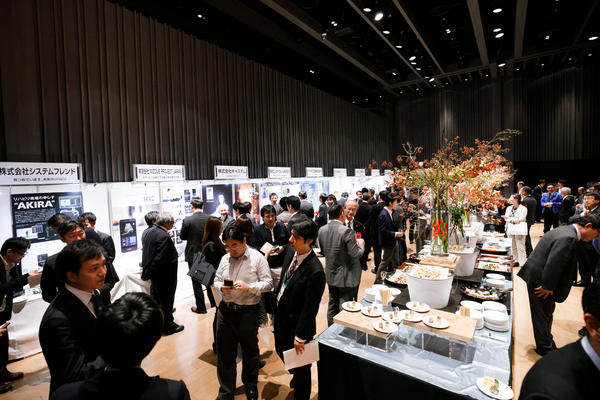 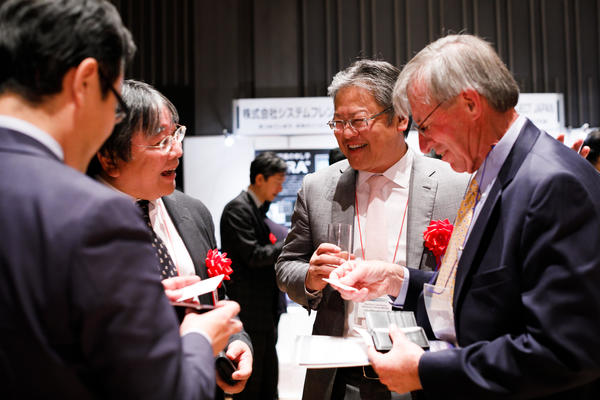