On January 25, 2018, Prof. Rob Knight from the University of California San Diego (UC SAN DIEGO) held "MICROBIOME -- Latest Research & Development," a symposium on the subject of the microbiome, or microbiota, at Nihonbashi Life Science Hub (Nihonbashi, Tokyo). This symposium was the first in the series of collaboration events between LINK-J and UC SAN DIEGO to be held by inviting prominent researchers from UC SAN DIEGO for three years, starting in 2017. The event included the first lecture by Prof. Rob Knight (leading expert in microbiome research) in Japan as well as presentations of studies by five experts on the microbiome from Japan and the U.S. 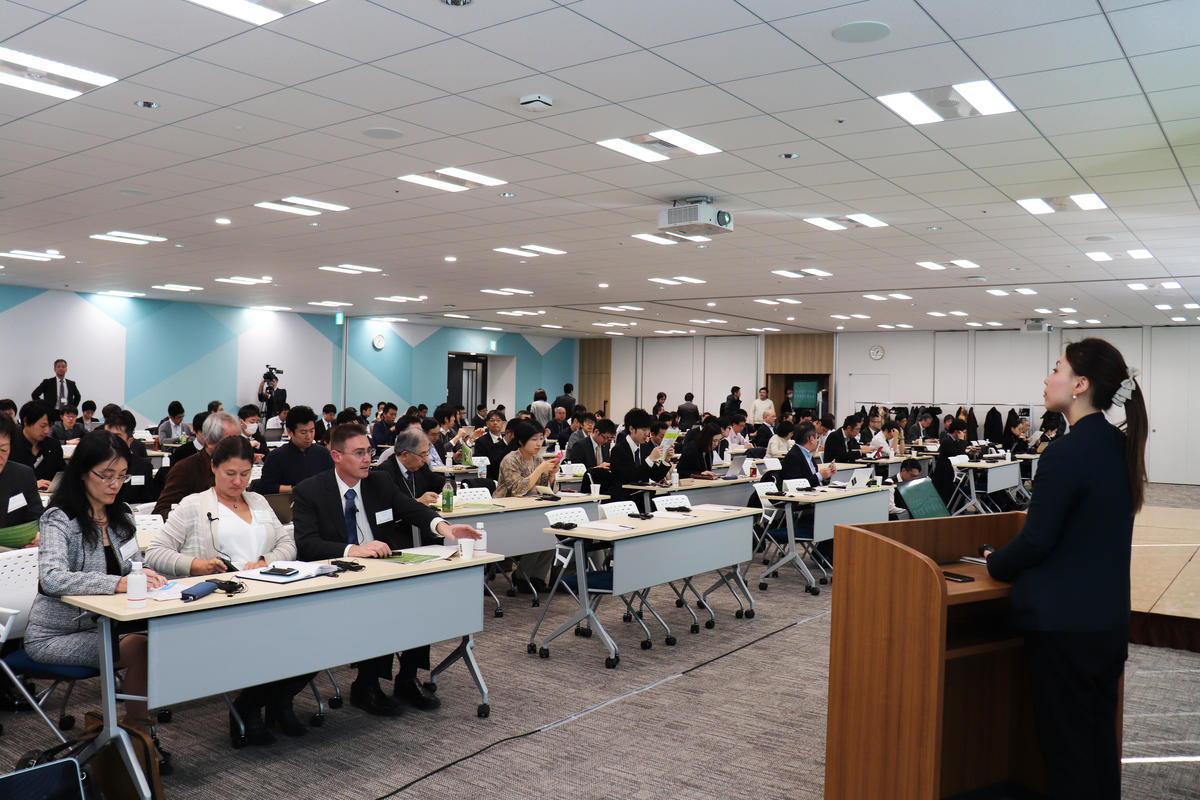 The microbiome is a concept that refers to a community of microorganisms in a certain environment. For example, in humans, microbiomes form in the mouth, large intestine, skin, vagina, and other organs. There are about 39 trillion microbial cells in the human body, which exceeds the total number of human cells--about 30 trillion. On the genetic level, the number of genes from microorganisms is 2 to 20 million, given that there are 20,000 human genes, which accounts for only 1% of the total. This shows the importance of microbiota research. 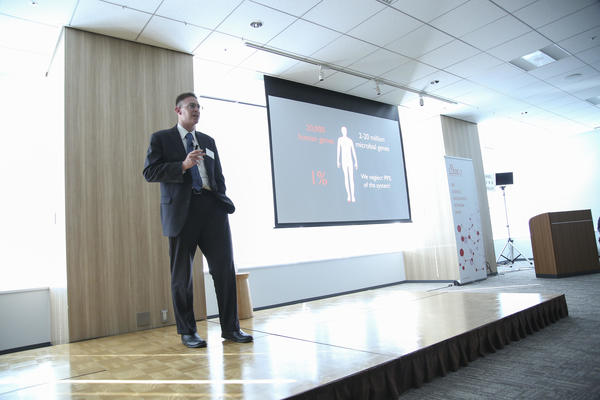 Microbiome research includes DNA sequence data analysis, which is also an issue related to big data. For example, at Human Microbiome Project (HMP) of National Institutes of Health (NIH), data of 4.5 trillion bases was analyzed using samples collected from 250 human subjects. A spoonful of fecal matter can provide data equivalent to one ton of DVDs.

Until recently, according to Prof. Knight, most researchers have been skeptical about the relationship between the microbiome and disease. "Our study has always been considered crazy," he said. However, subsequent studies have revealed that the human microbiome is associated with various diseases, including obesity, inflammatory bowel disease, arteriosclerosis, autism, Parkinson's disease.

The analytical technique visualizes the microbiome of healthy subjects as well as that of subjects with a disease using QIIME, a computer science tool, which enables detailed microbiome analysis, and dynamically examines the change in microbiota. "Today, analysis of the intestinal microbiome makes it possible to determine whether the subject is obese with over 90% accuracy," said Prof. Knight. When this is determined by genetic testing, the accuracy is said to be as low as 57%.

Based on these findings, Prof. Knight and his colleagues are conducting research aimed at modifying and changing the intestinal microbiome in any discretely chosen direction. One option is fecal transplantation. Taking Clostridium difficile colitis--a condition caused by a reduction of intestinal flora associated with antimicrobial therapy--as an example, it has been demonstrated that following fecal transplantation of a healthy microbiome without C. difficile into patients with colitis, clinical symptoms disappear in the first few days and the bacterial flora returns to a healthy state. According to Prof. Knight, the efficacy rate of fecal transplantation is as high as 90%, while that of antibiotics is only 30%. Prof. Knight thinks that microbiome information should ideally be used for health management. One example is a "smart toilet," which can instantaneously analyze and display the current state of your intestinal microbiome just after the fecal matter is flushed. Another example is "microbiome GPS," which evaluates the current state of your intestinal microbiome and tells you what to do to improve or maintain it. In the lecture, Prof. Knight revealed that researchers and companies in various areas and fields have cooperated to address these challenges and expressed his expectations for future developments.

The lecture was followed by a question and answer session between Prof. Knight and participants. In response to the question: "How soon can we have a complete understanding of the human microbiome?" He answered, "We still have a long way to go to fully understand it." In terms of the application of his research results, he predicted that they would be actively applied "without waiting for complete understanding." In particular, he presented a vision where microbiome research results would be used to help many patients with diseases where unmet needs exist, including Parkinson's disease, inflammatory bowel disease and diabetes.

The Center for Microbiome Innovation was established based on the vision of Dr. David Brenner, Dean of the School of Medicine at UC SAN DIEGO, Dr. Albert Pisano, Dean of the Jacobs School of Engineering at UC SAN DIEGO, Prof. Knight and other researchers. Dr. Brenner's hope was to make UC SAN DIEGO one of the top global bases in the microbiome field, while Dr. Pisano's desire was to expand the results through industry-academia cooperation. Their thoughts are reflected in the Center's mission known as the "4 Is": 'Infrastructure', 'Innovation', 'Instruction' and 'Industrial Interaction'

At the Center for Microbiome Innovation, the team led by Dr. Miller-Montgomery is responsible for building partnerships between industry and academia. She was originally involved in the industry, having built her career at a biotech company and an entrepreneurial venture. Taking advantage of her experience, she currently works as a bridge between industry and academia. The Center has over 120 research leaders who are working on microbiome research through competition. Dr. Miller-Montgomery said, "So to speak, our team works as an 'interpreter' connecting industry and academia" and plays an important role to improve the efficiency of industry-academia cooperation. 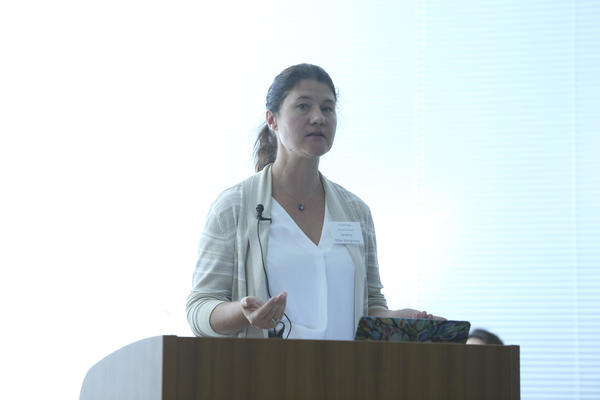 The Center has conducted applied microbiome research in various fields, including foodomics, cancer immunity and metabolic diseases and brain-gut interaction. Its study area is not limited to human medicine, covering a broad range of areas, such as plants, chemicals, foods, cosmetics and energy. In terms of cohort studies, five projects were introduced: HMP, EMP (Earth Microbiome Project), AMG (American Gut Project) and others. She said that the experts also work on data analysis and mentioned the importance of standardization using an open-source tool called QIIME, as well as a tool that can visualize the effects of antibiotics. These tools enable us to analyze the constitutive compositions and to examine the correlation with metabolites.

Based on many achievements, Dr. Miller-Montgomery said, "We will be able to realize healthy longevity through the improvement of the microbiome in the future. Nonetheless, we are still at the exploring stage and there have been no cases in which the Center's research results have resulted in a commercial product." In terms of the initial area of application, she presented her view that it is likely to be put into practical use in the field of skin care cosmetics at a relatively early stage, because of laws and regulations and other factors.

When it comes to industry-academia cooperation, the Center has two corporate sponsorship systems. Currently, it sponsors various companies in the fields of chemistry, pharmaceuticals, artificial intelligence, technology, dietary supplements and others. Looking at sponsorship for medium to large companies, it holds a biannual meeting for all the members. Dr. Miller-Montgomery said meeting in person is important and such occasions sometimes create new opportunities for cooperation. She encouraged Japanese companies to participate as well. 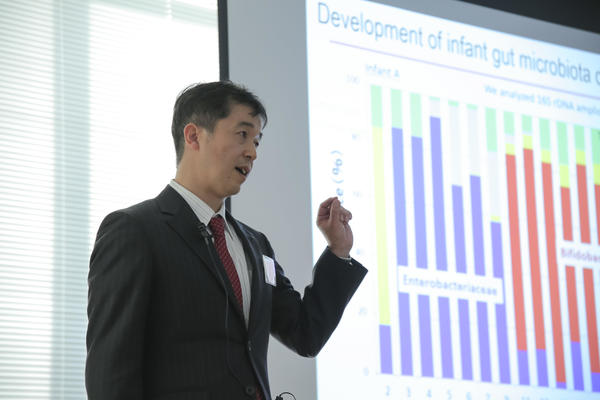 The next speaker, Dr. Wataru Iwasaki, presented study results on the microbiome in the natural world, such as soil and ocean water. Dr. Iwasaki and his colleagues use metagenomics--a method to comprehensively analyze the genome collected from the environment without isolating it--to pursue "the journey of microorganisms" moving between various environments. As a result of the research, they learned that microbial survival strategies include generalist species, which thrive in multiple environmental conditions, and specialist species which thrive only in a specific environmental condition, and that the former is more common in Proteobacteria while the latter in Bacteroides. Based on their past study, Dr. Iwasaki introduced in his speech the generalist driven model, in which the dispersion and evolution of microorganisms are led by generalist species, some of which become specialist species. 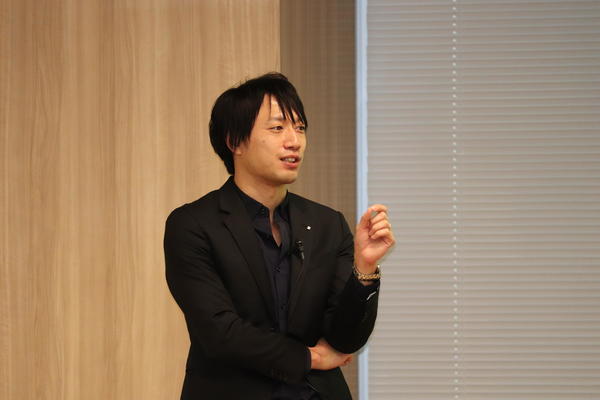 The next speaker Dr. Hiroshi Mori gave a speech on "developing tools and a database for microbial community analysis." Having analyzed millions of 16S rRNA gene sequences, eight years ago Dr. Hiroshi Mori and his colleagues developed the analysis tool VITCOMIC, which can calculate the taxonomic composition of the entire microbial community. VITCOMIC 2, the improved version, has been developed and released. They also created MicrobeDB.jp, a database integrating a variety of microbiological information, centering on genomes as well as genes, strains and environments. In the lecture, Dr. Mori explained the workflow of VITCOMIC 2, made a comparison with analysis tools used abroad and demonstrated its features. The speakers, including Mr. Rob Knight and Dr. Sandrine Miller-Montgomery, participated in the reception that followed the symposium, actively responding to questions from visitors and exchanging opinions. The reception was a great success.

"This symposium provided a wonderful opportunity to connect microbiome research at UCSD with both academic and industry researchers in Japan. It was a great opportunity both to meet in person people at companies with whom we had already been corresponding, and to spark new interactions. LINK-J were wonderful hosts and the trip was both productive and enjoyable."