Why did Nihonbashi Honcho become "the town of medicine"?

Nihonbashi Honcho was the center of commerce in Edo and remains home to many established businesses. Did you know that Nihonbashi Honcho is also known as "the town of medicine"? Supporting the nickname, it is the location of the head offices for numerous domestic and overseas pharmaceutical companies. What is the history behind "the town of medicine"?

Nearly 400 years ago, in 1590, Tokugawa Ieyasu moved to Edo. That August, he ordered large-scale civil engineering projects. Machiwari (dividing land to make towns and streets) started in September in modern-day Nihonbashi Honcho. In other words, Nihonbashi Honcho was the first civilized town in Edo.

Subsequently, in 1603, Ieyasu started the feudal government and Edo quickly transformed into distinct towns. People in commerce and industry nationwide began to gather there, including yakushusho (medicine merchants). Ieyasu defined the Nihonbashi area as the center of Edo and issued a proclamation to encourage merchants to settle within a group of similar traders. Yakushusho were to gather around modern-day Nihonbashi Honcho 3-chome, which was the beginning of Nihonbashi Honcho's birth as the center of the medicine trade in Kanto. ●It all started with eye drops

Masuda Tomoyoshi is reportedly the first yakushusho that settled in Nihonbashi Honcho. He was from the family of an ophthalmologist who worked for the Hojo clan in Odawara. After the demise of the clan, Masuda moved to modern-day Nihonbashi Honcho 4-chome. The start of his business was strongly connected to the town development in Edo.

The reclamation of Toshima Susaki is one of Ieyasu's civil engineering projects and was especially large in scale among the projects he pushed forward in Edo since 1603. Laborers gathered from across the country were involved in its construction. However, the excessively grueling labor led to malnourishment and successive eye diseases. This inspired Masuda Tomoyoshi to manufacture and sell Masuda Goreiko, an eye drop allegedly effective in the prevention of eye diseases. It became an instant success and was advertised in an issue of Edo Kaimono Hitoriannai (guidebook to shopping in Edo) published in 1824. Other publications from 1657 and 1690 also mention Masuda Goreiko, evidence of its popularity. 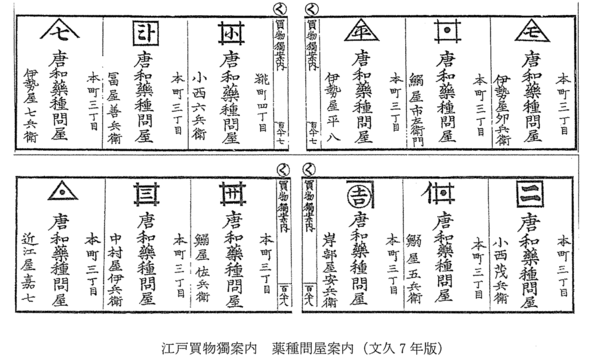 From the Kanbun to Genroku periods, namely 1661 to 1703, wholesalers, retailers and other modern business models emerged. Yakushudon'ya, wholesalers that sold raw materials for medicine and dispensed medicine, increasingly played a central role in the medicine trade in Nihonbashi Honcho.

The wholesalers formed an organization equivalent to a guild. They began to gain more power by cooperating with government policies. In 1822, Wayaku Aratamekaisho, an institution for controlling the quality of wayaku (medicines made in Japan) was a milestone for the yakushudon'ya guild in Nihonbashi Honcho. Tokugawa Yoshimune, the eighth shogun of the Tokugawa shogunate, actively encouraged the expansion of wayaku, which was less expensive than its Chinese counterpart and affordable for common people. However, this also led to the circulation of counterfeit medicine. The shogunate decided to establish Wayaku Aratamekaisho to conduct inspections in order to prevent the circulation of counterfeit medicine. In Edo, the yakushudon'ya guild in Nihonbashi Honcho was assigned to such operations. At that time, yakushudon'ya wholesalers in Nihonbashi Honcho were authorized to directly receive medicine packages from around the country. Consequently, they began to monopolize the market in Edo.

During the Meiji period, the environment surrounding medicine underwent drastic changes, such as the introduction of Western medicine and the separation between dispensing medicine and medical practice. Again, the yakushudon'ya wholesalers in Nihonbashi Honcho were united and formed Tokyo Yakushudon'ya Bokusho to adapt. In 1880, they were the first in the country to revise the rules for quantifying medicine and donated Chinese medicine to the charitable hospitals that were successively established around that time. Some of those yakushudon'ya wholesalers were the forerunners of today's pharmaceutical companies.