Why did Nihonbashi Honcho become "the town of medicine"? ~From Meiji era to early Showa era~

In the 1st column we introduced that Nihonbashi Honcho became "a town of medicine" as medicinal merchants gathered since the beginning of Edo period. This time let us talk about the history of Nihonbashi after the Meiji while looking into the maps.

Yakushusho (medicine merchants) gathered in Nihonbashi Honcho again in Meiji era but the wave of civilization brought a slight change this time. By the year of 1882 (Meiji 15), the number of people who handled the "Western medicine" had increased.

In the background, various systems concerning medicines had been developed, beginning with the first medical system in Japan called "Isei", the doctor licensing system, which was proclaimed in 1872 (Meiji 7).

In Nihonbashi Honcho, 62 people gathered in 1884 (Meiji 17) to establish the " Yakushudon'ya guild". After the "Important Export Commodities Association Act", was proclamed, it was renamed to "Tokyo Pharmaceutical Trading Guild" in the year of 1900 (Meiji 33).

At that time 80 people agreed to establish the guild. According to Nakano Akira's "Nihonbashi Honcho" (published by Tokyo Medicinal Trade Association), it was estimated that more than two-thirds of the Tokyo yakushudon'ya wholesalers had joined. The current Tokyo Pharmaceutical Association says, "Although this organization represented yakushudon'ya wholesaler in Tokyo, It is correct to see that it was the association of Nihonbashi Honcho."

Let's see the map of Nihonbashi Honcho at that time. The Tokyo in the Meiji era had different division from Tokyo today. "Nihonbashi Honcho" referred to the area along the front street of the Bank of Japan starting from Tokiwakabashi, and the Honcho 1-chome to 4-chome lined up from the east side of Bank of Japan. 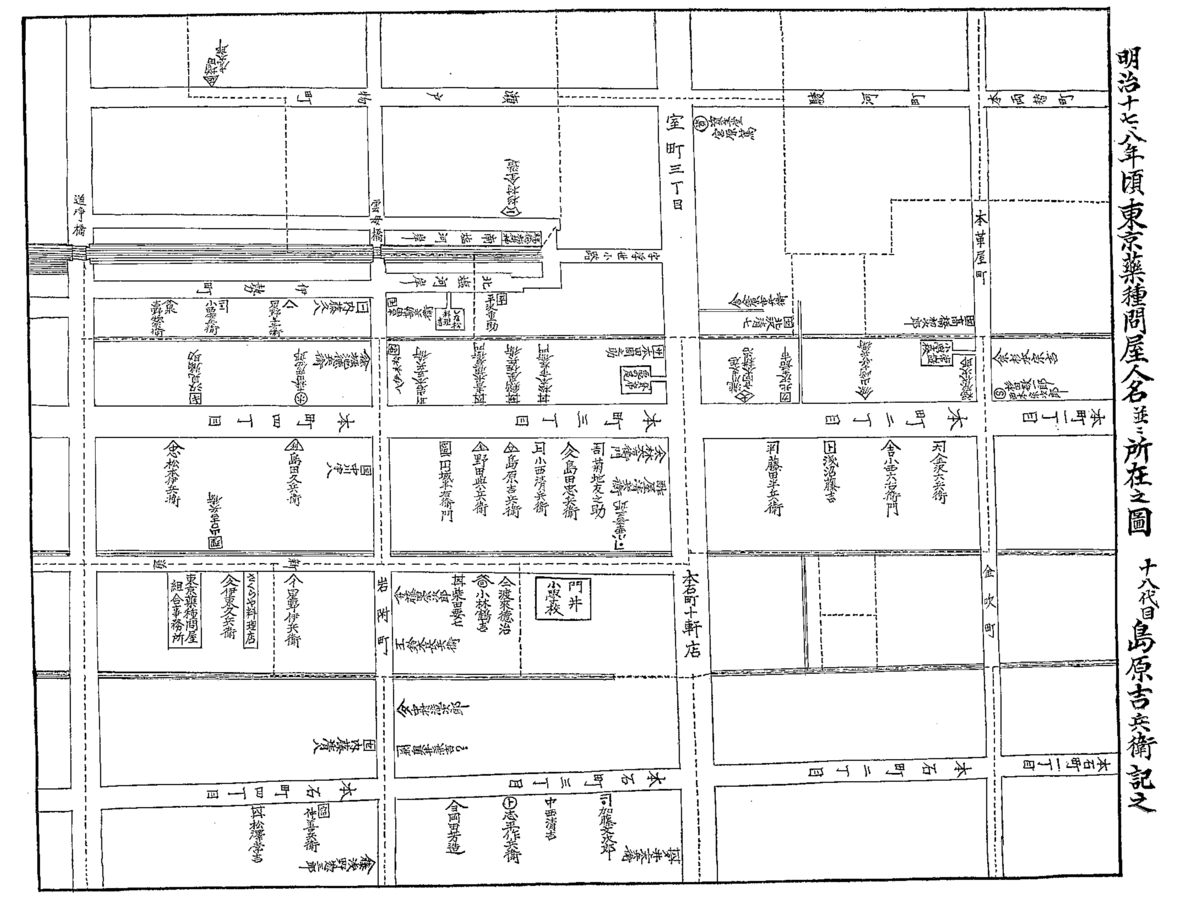 Above is a map of the names and addresses of the medicinal wholesale shops around 1884 (Meiji 17). Tokiwakabashi was located on the right side outside of the map. You can see at a glance that yakushudon'ya wholesaeres were concentrated in Nihonbashi Honcho.

By the year of 1897 (Meiji 30's), about 60 shops were scattered in the so-called "Honcho drug market" including neighboring towns and it is known that the majority of which were concentrated here in Nihonbashi Honcho 3-chome and 4-chome,

When the era moved on to Taisho, the First World War broke out in 1914 (Taisho 3). As a result, medicine from Europe, especially Germany, could not be imported, resulted in lack of medicines and soaring prices. As the joint government-corporate pharmaceutical business was launched, the domestic pharmaceutical industry had become increasingly active.. In this way domestic medicines had increased in the middle Taisho era, but as the war ended, it became dependent again on foreign goods and the mainstream of medicines continued to be occupied by imported western medicine.

The yakushudon'ya wholesalers remained concentrated in Nihonbashi Honcho. According to the map printed on "Taisho, Nihonbashi Honcho" , which was drawn based on Mr. Kitazono around 1921 (Taisho 10), there is a description that from Honcho 3-chome to 4-chome "There are many drug shops on both sides of this street."

On September 1, in 1923 (Taisho 12) the Great Kanto Earthquake shook Nihonbashi Honcho. The yakushudon'ya wholesalers also suffered catastrophic damage, and only 13 out of 141 people in the guild avoided the disaster. Only the warehouse of the yakushudon'ya wholesaler "Nakataki" (「中滝」) was left from the burn in the neighborhood and everything else has turned into ash.

Nevertheless, the guild was encouraged and planned to jointly purchase medicines from the Osaka market as an urgent measure. On September 26 of the same year, representatives met with Osaka Pharmaceutical Association members and decided to purchase emergency medicines. A month later, medicines had reached Shibaura and the association's activities began at the end of October.

Medicines in the early Showa era and Nihonbashi Honcho

After this unprecedented disaster, the government planned and implemented "Teito reconstruction project". Thus, in 1932 (Showa 7), "Daitokyo city" was born. Upon the birth of Daitokyo city a major review of the area was done. Honcho division was also changed. The street lined up north and south from Honcho 1-chome to 4 chome starting from the Edo bridge. It became almost same division as present day. 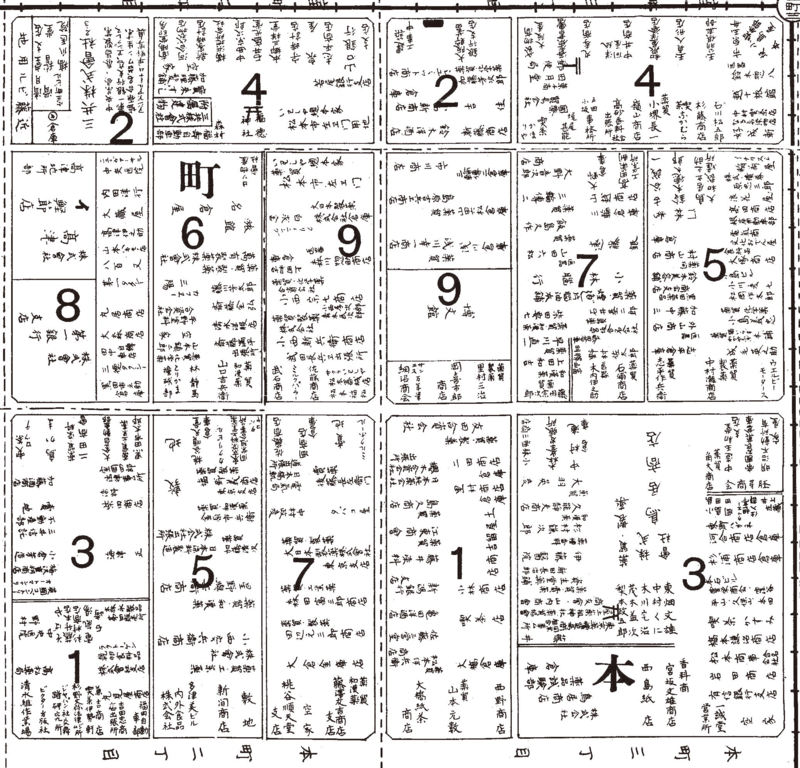 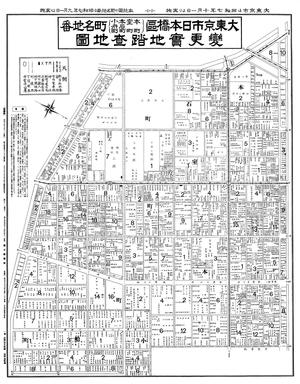 Left: Enlarged map of Honcho 2-chome and 3-chome on the right map Right: Map of Daitokyo city Nihonbashi in Showa 7 (Click and PDF will open)

Let's look at the map of the year when the city of Daitokyo city was born. There was the Bank of Japan in the center of the upper part of the map. Nihonbashi Honcho continued from the Edo bridge on the left bottom of the map to the main street extending to the right side of the map along 1-chome to 4-chome.

If you look closely near Honcho 2-chome to 3-chome, there were store names written as "medicinal trade" which means that it was a member of cooperative association of the Tokyo Pharmacopoeia. Even if the division has greatly changed, the yakushudon'ya wholesalers gathered in Honcho.

As for this division arrangement of Honcho, Matsumoto Shisaemon, who was a 17th-in-generation and engaged in medicine industry in Honcho said, " I prefer a boundary line that make Honcho as the center of pharmacy since Honcho represents medicine wholesaler" which indicates thatyakushudon'ya wholesalers had strong insistent on "Honcho".

Nihonbashi Honcho has been a "town of medicine" Continuously even if the period moved on from Edo, Meiji, Taisho, and Showa era.