Delta-Fly Pharma Inc. was listed on the Mothers (Market of the high-growth and emerging stocks) of Tokyo Stock Exchange in October 2018. Delta-Fly Pharma Inc. is expected to further contribution to medical treatment with their unique "Modular Drug Discovery" approach. This enables taking 5 R&D pipelines, for instance, relapse or refractory acute myeloid leukemia and other cancers. 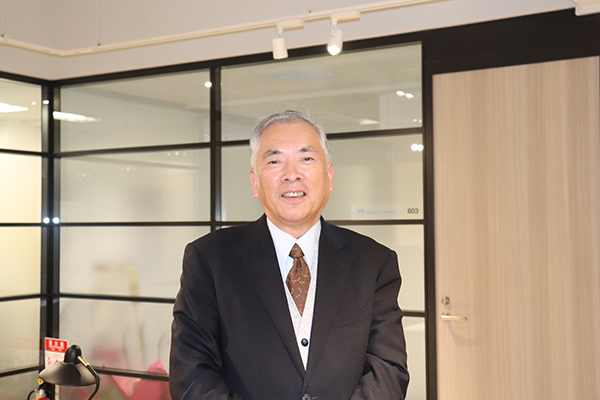 "Modular Drug Discovery" is a concept based on the idea "Assembling" "Modules". Considering existing drugs such as anti-cancer agents as "Modules," then "Assemble" them by adjusting the dosage regimen and molecular bonding. This methodology brings to enhance the balance of the clinical effectiveness and safety. This method is expected to shorten the research and development period and reduce the risks in product development, as it requires minimal basic research in comparison to the typical development process for anti-cancer agents.

Following is the interview with Dr. Kiyoshi Eshima, President and the founder, and Senior Managing Director, R&D Kenzo Iizuka. They told their story behind the foundation the changes followed the IPO, and why they opened an office in Nihonbashi.

――Dr. Eshima, would you tell me what made you to found your company? Had you been thinking about starting your own company while you worked for TAIHO PHARMACEUTICAL CO., LTD. for 35 years?

Eshima: I am from Tokushima Prefecture. I got a job at Otsuka Group, which is a major pharmaceutical manufacturer in Tokushima, and was assigned to TAIHO PHARMACEUTICAL. At TAIHO PHARMACEUTICAL, I had been worked at R&D division with Yukio Kobayashi, the company's first president. Kobayashi had outstanding business judgment and I had the opportunity to learn how to manage a company at his side. Hence, I gained my confidence in my ability in management and also, Kobayashi told me that a small company was better to make a quick decision, that is why left TAIHO PHARMACEUTICAL.

――The year 2010, the establishment of Delta-Fly Pharma, must have been a hard time for startups concerning on fund raising.

Eshima: Certainly, there were financial crisis around 2010. One venture capital (VC) firm president told me "You might have no thought, or you can see the distant future otherwise you may not start a new company in this time and age." Nevertheless, we were confident that we could streamline the path of drug discovery and expect a certain probability of success.
Standard drug discovery requires an enormous amount of time and effort, but with modular drug discovery, the early stages of research could be skipped to some extent, it took shorter time than usual, and made it possible to do drug discovery with less risk than with doing with entirely new compounds. This concept enabled to convince VCs even at that harsh economic climate. 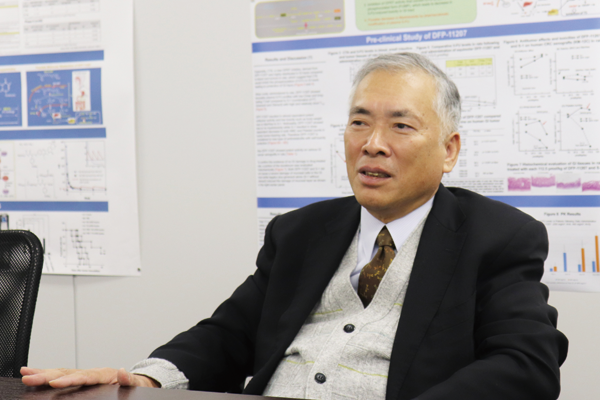 ――When did you first come up with the concept of "Modular Drug Discovery"?

Eshima: In my previous job, I had conducted R&D using a similar approach with "Module" but not using that word. For instance, cases of anti-cancer agents found in Latvia while I was with TAIHO would fall under this category. This medicine made a hit in Japan, we conducted clinical trials and produced an oral agent. we decided to get a head start in commercializing this approach as we believed that the process of modifying a drug after the patent expires could be applied to drug discovery for a variety of diseases. Optimizing drug discovery requires a vast expenditure of funds and startups are unable to afford that. I am sure that using the "Modular Drug Discovery approach"has significant merits for creating pharmaceuticals.

Eshima: We all did. This assembly method is typically used in IT and auto industries for product development therefore we felt it would be an appropriate name for applying this method to pharmaceuticals.

Iizuka: In the beginning of Delta-fly, we used "eco-oncology", which means "Modify existing drugs efficiently into more useful things" and "create an ecologically sustainable cycle." but VCs hardly understand the meaning of that. "Modular" was popular in IT industries and was easier to understand, that is why we decided to go with "Modular Drug Discovery". Not all VCs are acquainted with drug discovery, using the concept "Modular Drug Discovery" had been made sense to them that our drug discovery approach was more efficient, as module is used in other industries for R&D process might be familiar to them.

――Did you have hard times leading up to the IPO?

Eshima: Well, the development of our pipelines has been coming along quite smoothly since our launch, moreover, we have received financing support twice from VCs and twice from business firms. We felt that an IPO would ultimately be necessary to roll out Phase 3 globally, therefore we began to prepare for the IPO in 2014. However, it took longer than we had initially anticipated, so the process was not necessarily a smooth one.

――What is the status of your current development pipelines?

Eshima: Since launch of Delta-Fly Pharma, three products have entered clinical trials in eight years. In the future, much depends on whether DFP-10917, a drug for treating relapsed/refractory acute myeloid leukemia (AML), would get the approval. Currently, DFP-10917 is at the stage of transitioning to Phase 3 trials in United States. Regarding the IP, we have applied for and been granted patents in 80% of major countries, so we plan to license out global sales rights once it get the approval. However, we consider that it would be possible for a biotech startup like us to sell anti-cancer agents.

――Your company is headquartered in Tokushima Prefecture. Now you have your Tokyo office, would you tell me what made you having Tokyo office in Nihonbashi?

Eshima: Doshomachi in Osaka used to be the main hub for pharmaceutical manufacturers, but it has been changed to Nihonbashi with the advance of globalization. We do our main external relations activities in Tokyo. We have IT infrastructure in place, so we are leveraging it as much as possible to link our hubs and maintain communications.

Iizuka: In Nihonbashi, communication with people outside the company is much easier. The Tokyo Stock Exchange is nearby, and both the Japan Pharmaceutical Manufacturers Association and AMED are based in Nihonbashi. There are also a variety of events held at venues related to LINK-J, so we are able to gather information as well.

Eshima: The reason why major pharmaceutical manufacturers locate their labs and factories in Tokushima is for inexpensive land and existence of skilled people in health care fields for recruiting. Tokushima University put efforts in the life science researches, with the divisions of medical, dental and pharmacology. Having these three departments in one regional university is very rare. I am working for the Department for the Promotion of Industry-Academia-Government Collaboration in Tokushima University to negotiation on licensing. 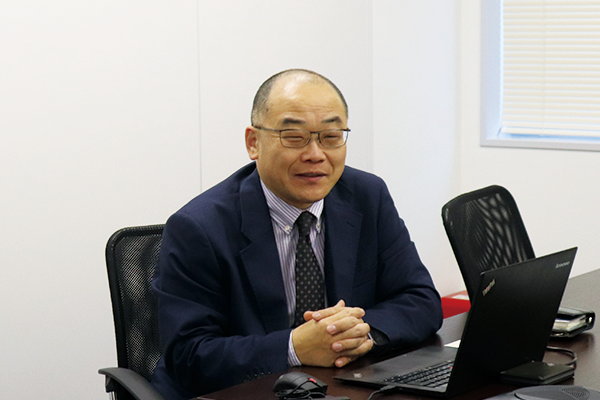 ――How do you think about recruiting new personnel?

Eshima: I believe that recruiting highly skilled professionals is a crucial point for startups to success. Fortunately, securing having personnel who are capable of R&D management lead us to make it thus far. We are an organization with small numbers of highly skilled people coming to about 20 in all with executives included, 5 in Tokushima, 3 in Tokyo, and 3 each in China and United States. Most of the staff work close with executives, and our outside contractors work in a way similar to company employees. The competence levels of our outsourcers are very high, a major firm in China are capable of performing animal testing and manufacturing, have thorough knowledge of the FDA regulations, and provide with high quality service at low cost.

Eshima: We have an office in Beijing to do pre-clinical management, as well as to search for future markets, set up facilities suitable for performing clinical development, and secure human resources. Moreover, we are working on plans to make Vancouver the official hub of our North American network. First, we intended to have an office in United States for clinical trials, but Vancouver turned out to be a better living environment for employees.

Eshima: We need to strengthen our management framework, including corporate governance for the IPO. We are still recruiting aggressively to expand to about 40 personnel within the next 5 years or so.

Iizuka: We look for new employees who is working at a major firm and has know-how but unable to do what they want and support our mission. We think it is necessary to have a place where senior people can play an active role.

――Would you explain how things have changed since the IPO.

Eshima: The company's credibility has changed before and after the IPO. For instance, we found an appropriate person who knew everything from CMC to clinical development, had experience in leading up to establish an U.S. hub. The determining factor for that personnel was that we were a listed company. I think if we had not gone public, recruiting would have been more difficult.
By becoming a listed company, we also now receive many more direct inquiries from individual investors by telephone. We feel the need to be more pro-active about releasing information to investors as well, such as information on patent acquisitions that might be common knowledge to drug discovery specialists, but have not been covered in press releases before. We wish to continue working to develop our business while meeting the expectations of the shareholders.

――Finally, can you tell me about your aspiration for the future?

Eshima: We will do our best to get our drugs into the hands of patients as quickly as possible and want to ensure that people can use our drugs with peace of mind. We hope to expand our business steadily step by step while improving management transparency and releasing updates on our progress to the public.

Kiyoshi Eshima, President and Founder of Delta-Fly Pharma Inc.
He joined TAIHO PHARMACEUTICAL CO., LTD. in 1976. After serving as managing director of the company's Development Center and the Tokushima Research Center, he founded Delta-Fly Pharma Inc., and assumed the post of president. He has served concurrently as a visiting professor at Tokushima University since 2010.